Join us for our biggest fundraiser of the year! Celebrate peace, love and paws by letting out your inner flower child and helping the shelter animals. This event is tons of fun-get your tickets now at the shelter or online at https://www.sagepayments.net/eftcart/products.asp?M_id=823515743333

Hope to see you there! 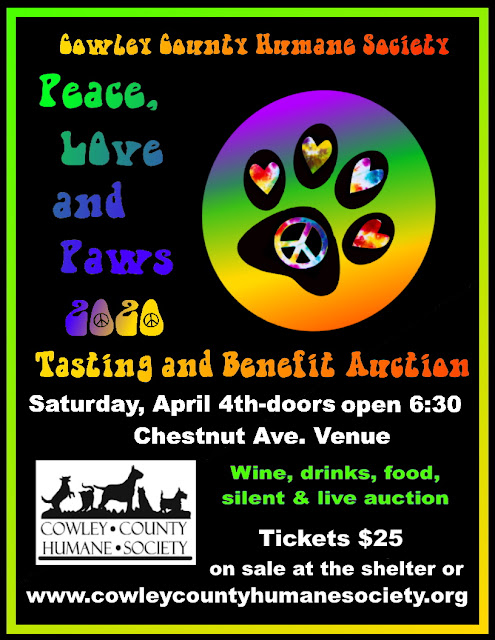 Posted by Cowley County Humane Society at 5:15 PM No comments: 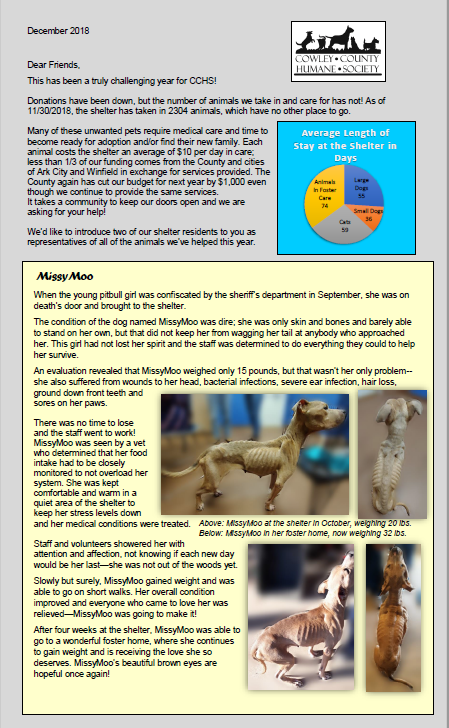 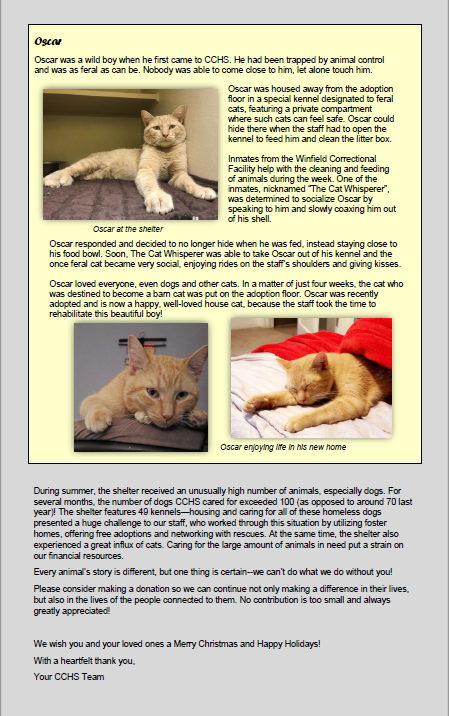 Posted by Cowley County Humane Society at 3:53 PM No comments:

Farmers markets in Winfield and Ark City are coming to an end at the end of September, but stay tuned for fall and winter events! We will continue having our pet treats, dog beds, engraved glasses, neck pillows, bandanas, crocheted pet items and more available! Check our event page on Facebook--we will post as soon as we know which events we're attending!

All items were donated to us by volunteers and are available for a donation; all proceeds benefit the shelter! 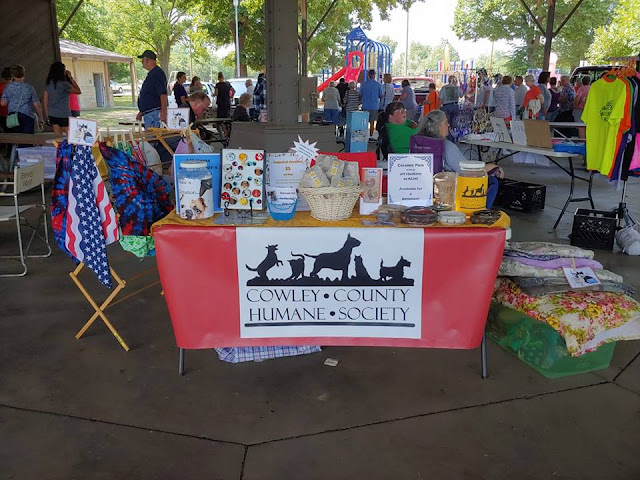 Posted by Cowley County Humane Society at 3:09 PM No comments:

National Craft For Your Shelter Day

July 21st is National Craft For Your Shelter Day!

The daily routine of our shelter animals can be very boring and enrichment items help keep them occupied and happier. Many items are very inexpensive to make, with things you already have at home!

Collecting corks? Drill a hole through, pull a string through and you have a cat toy. Cardboard shapes, pipe cleaners or feathers with strings attached also make great cat toys. Dogs love toilet paper pinatas (toilet paper rolls stuffed with dry food or treats, then the ends folded in). Or make toys from old socks or t-shirts--the internet gives endless ideas! Below are a few links to get you started. 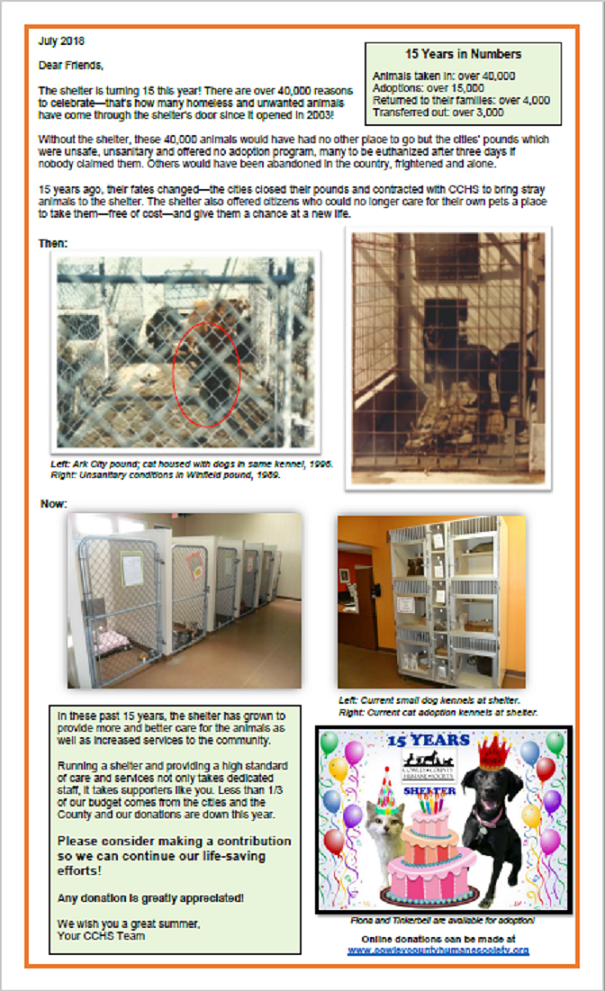 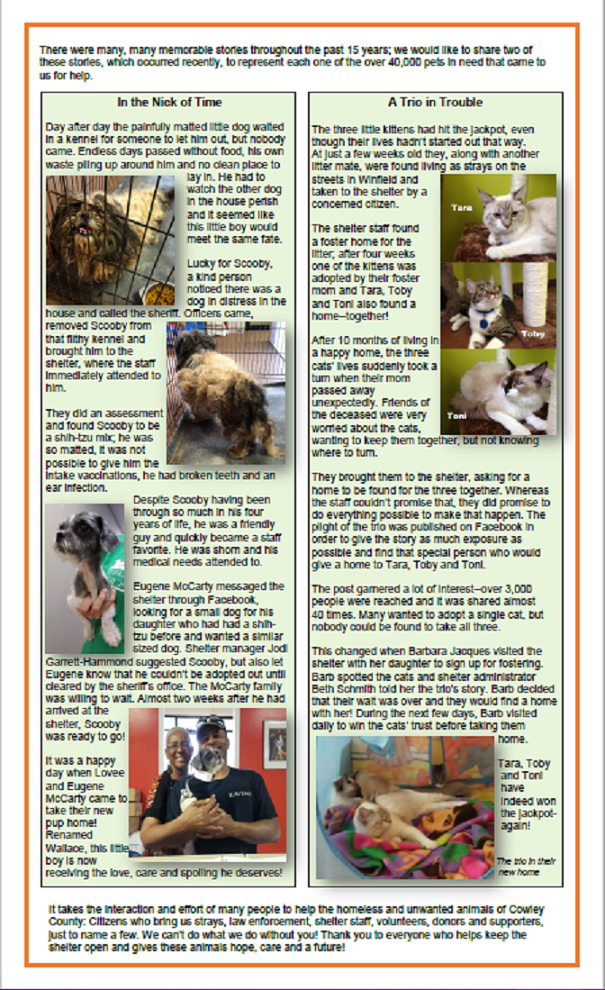 Posted by Cowley County Humane Society at 2:19 PM No comments:

Pawrabian Nights
Join us for a magical night of wine tasting (other drinks available), food, live and silent auctions and lots of fun! Tickets are $25 each and include 10 courses of wine, beer, cocktail, water, and food. This is our biggest fundraiser of the year and all proceeds benefit the shelter! Get your tickets here:
https://www.sagepayments.net/eftcart/products.asp?M_id=823515743333 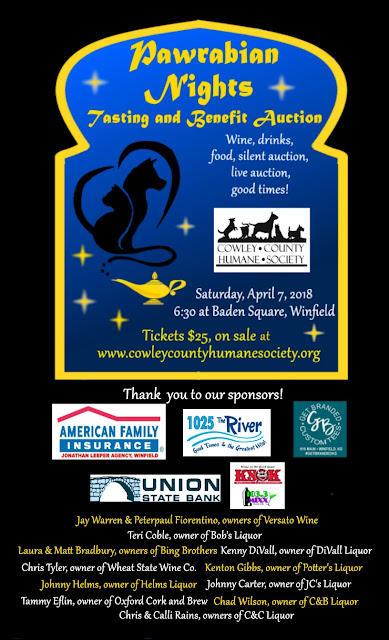 Wingnuts Benefit Concert--Big & Rich
Wichita Wingnuts are hosting their 3rd benefit concert on June 16th--this year, Big & Rich will be the headliner! Tickets are $40 each and $20 of each ticket sale will benefit CCHS if you use this direct link http://purchase.tickets.com/buy/TicketPurchase?orgid=37328&agency=SEDV_PLAGENCY&pid=8551639&coupon=CCHS (CCHS promo code will already be applied if ordering through this link). A great way to enjoy music and helping the shelter! 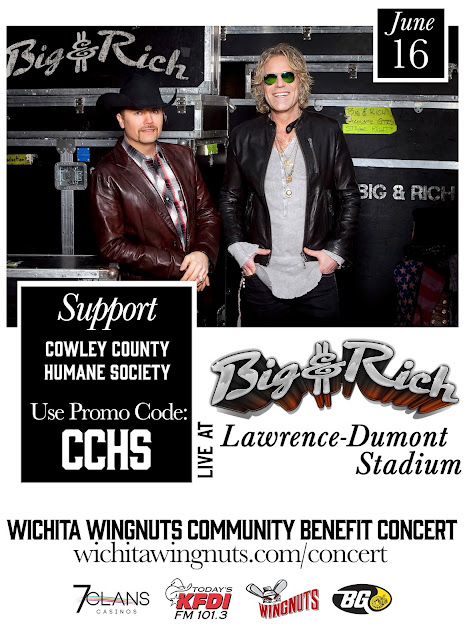 Posted by Cowley County Humane Society at 4:37 PM No comments:

At only seven months old, the little black Chihuahua mix found herself homeless and at the shelter--her family was moving and couldn't take her with them. Little did she know she was to meet the love of her life just a few days later. 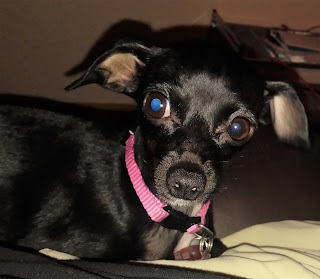 Andrea Elstun came to the shelter in September 2016; she had heard about our free adoption special and was looking at the small dogs when Raven caught her eye.The little dog spotted Andrea, came to the front of the kennel, stood on her hind legs and let out a bark as if to tell Andrea to take her home. When the shelter staff took Raven out of the kennel for a personal visit, she jumped into Andrea's arms and gave her kisses--it was love at first sight!
Raven had not been spayed yet and had to remain at the shelter for another two days, which seemed like an eternity to Andrea. Finally, Raven was able to go where she belonged--home! 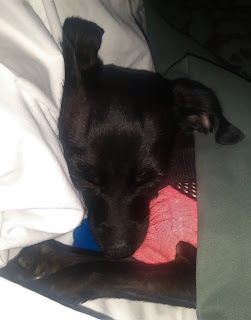 Fast forward a month--Raven developed a knack for picking things up from the floor and giving them to Andrea, without having received any training. The family then moved to Pittsburgh, KS and Andrea found a service dog trainer, thinking Raven had the makings of a service dog. She was right! The little dog was trained in six weeks and received her service dog certification in four months. 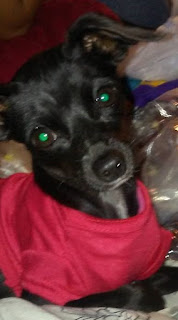 Andrea can't bend down and Raven makes her life so much easier. From household chores to shopping, the pint-sized pup does it all! Raven brings things like shoes and keys to Andrea and even has learned to jump on a chair with items so Andrea doesn't have to bend down to pick them up. Raven comes along to the store, rides in the shopping cart and hands items to Andrea for check-out. She can even get packaged foods from the bottom shelf. 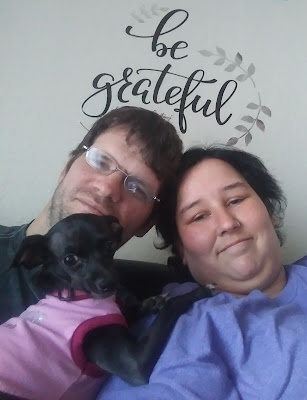 That is not all! Raven keeps Andrea from panicking in crowds by licking and nuzzling her. She alerts her to seizures by pawing and barking, giving Andrea enough time to take her medicine and go to a safe place in case the medicine doesn't kick in on time.
Raven is also a great help to Andrea's son, who is autistic. She keeps him calm and always knows where to find him.
Who's to say little dogs can't have big jobs? This little dog's love for her family is as big as her job and her family loves her right back. Andrea says she is the greatest dog ever and she would be lost without Raven. This former homeless dog not only found a loving home, she has also found her purpose.

Posted by Cowley County Humane Society at 4:40 PM No comments: