Stella, a precocious American blue heeler mix, turned two in March. She came to the shelter with her mother and four siblings in April, 2014. This entire canine family was struck with tragedy. The mother, Simone, was heart worm positive. She was treated and was transferred to a rescue who found her a home. However, four of her five pups contracted parvo virus and died. Little Stella was the lone survivor of the litter

Dags, a cheerful American pit bull terrier, came to us in July of 2016 with two other dogs. They had been found, abandoned, by the Cowley County Sheriff’s Department. All three were very underweight, crawling with fleas, and dehydrated. They were held on a “cruelty hold” while the sheriff’s department attempted to find the owner. They were unsuccessful.

What do these two dogs have in common? Both were adopted by Dotti and Karl Call, and their children Kaya and Magnolia, of Oklahoma City, OK. They adopted Stella as a puppy. Fostering first, they introduced her to their senior dog. There were some concerns about how the relationship would go as Stella’s new big sister, Scooby, had been the Queen of the Castle for some time. The goofy puppy, however, stole Scooby’s heart (and food and toys) in no time.

Two years later, after Scooby had passed, the family wasn’t really looking for a new pet. However, Dotti’s sister works at the CCHS and was completely smitten with the sweet tempered Dags. Knowing what a soft touch Dotti and Karl are she broached the subject of just fostering Dags for a couple of weeks to see how things went. Stella, after all, needed a playmate, right? Within half an hour of the family meeting Dags, it was clear that she had found her furever home. 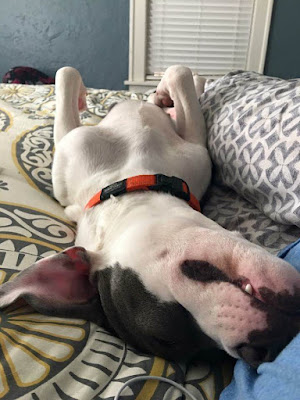 Dotti says, “When Dags first came to us, she really didn't seem to know how to ‘dog’. We think this may be due to her having been kept in a small cage or enclosure during much of her early life. We would take her for rides in the car and she didn't know what to do with an open window. We got her a nice soft bed, she laid on the floor beside it. We got her toys and chewies, she just looked at them, no idea what she was meant to do. In the short time she's been with us, all of this has changed. She now has the most joyous playful nature. She jumps in the car and immediately paws to have the window rolled down so she can stick her whole head out of the car.”

These two wonderful girls are now living the dream and making the Call family happy every day. They love to go hiking, take rides in the convertible, and play endlessly with each other. This summer the two pooches went on a road trip to Colorado where they ran around in the woods, made new friends at dog parks, and went to restaurants all over Denver.

Sometimes the most tragic beginnings lead to the
happiest endings.

Posted by Cowley County Humane Society at 11:41 AM 2 comments:

Senior pets still have so much love to give--will you give them a chance? 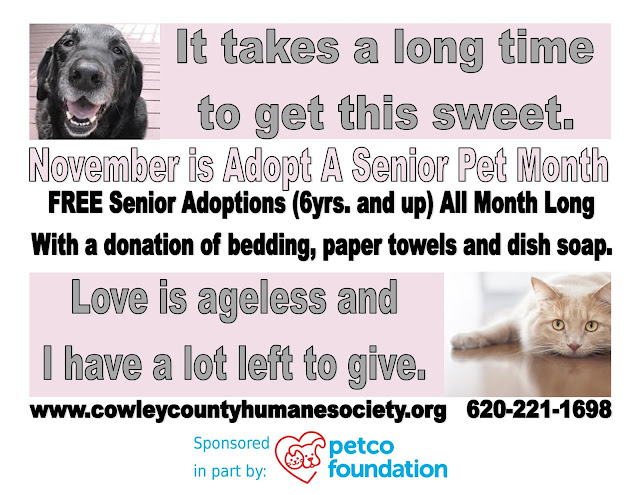 Posted by Cowley County Humane Society at 11:08 AM No comments: