From The Streets To The Service

When Carter was dropped off at Cowley County Humane Society by Arkansas City's Animal Control Officer, no one had any idea that in just a couple of years he would be a certified service dog helping a U.S. Navy veteran.

Woodson is an 18-year Navy veteran who served in Iraq and Afghanistan.
He was diagnosed with post traumatic stress disorder (PTSD), and suffered from nightmares and balance issues.

Carter was at the Humane Society for a little over two months before Woodson found him.
After being adopted, Carter underwent approximately a year and a half of training to become a service dog.

He now is able to sense if Woodson is suffering from a nightmare and wake him up, increasing the quality of rest that his owner receives.
“Carter keys off my endorphins and calms me down when he senses me getting upset,” Woodson said. “He's changed my life.” 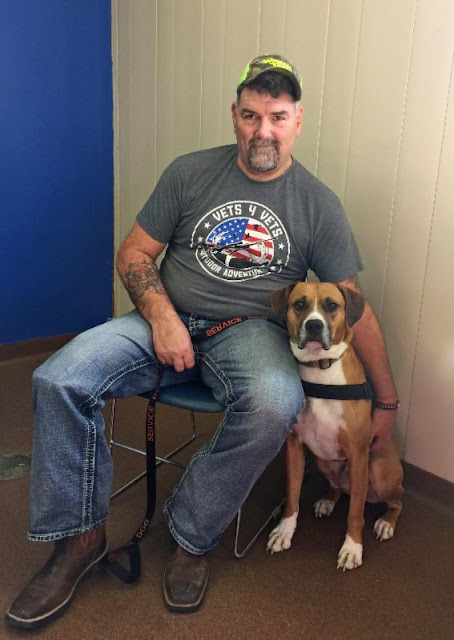 In the future, Woodson plans presentations with Carter at schools, to educate children on the roles of service dogs and how to behave when they meet one.


Turner has trained dogs for 20 years and opened Complete K9 in 2009.
Posted by Cowley County Humane Society at 7:00 AM No comments: