CCHS had many boxes of brand-new dog clothing, accessories, costumes, toys, ornaments, cleaning supplies, etc. donated so we decided to open a one-day only Doggie Boutique. We even made a commercial to entice as many people as possible to come visit us: Click here to view video.

It was a rainy day when we opened up the garage behind American Family Insurance in Winfield on Saturday, January 31st, but that proved to be an advantage--we were able to supply many dogs of all sizes of with warm sweaters and jackets. Or just some fashionable threads for the canine divas. Everything was available for just a donation and we raised $1290 for the shelter! A HUGE thank you to everyone who came out, shopped and donated!
Check out some photos of the location and happy customers:

Posted by Cowley County Humane Society at 4:37 PM No comments:

For our readers who missed the story on Facebook, here it is: 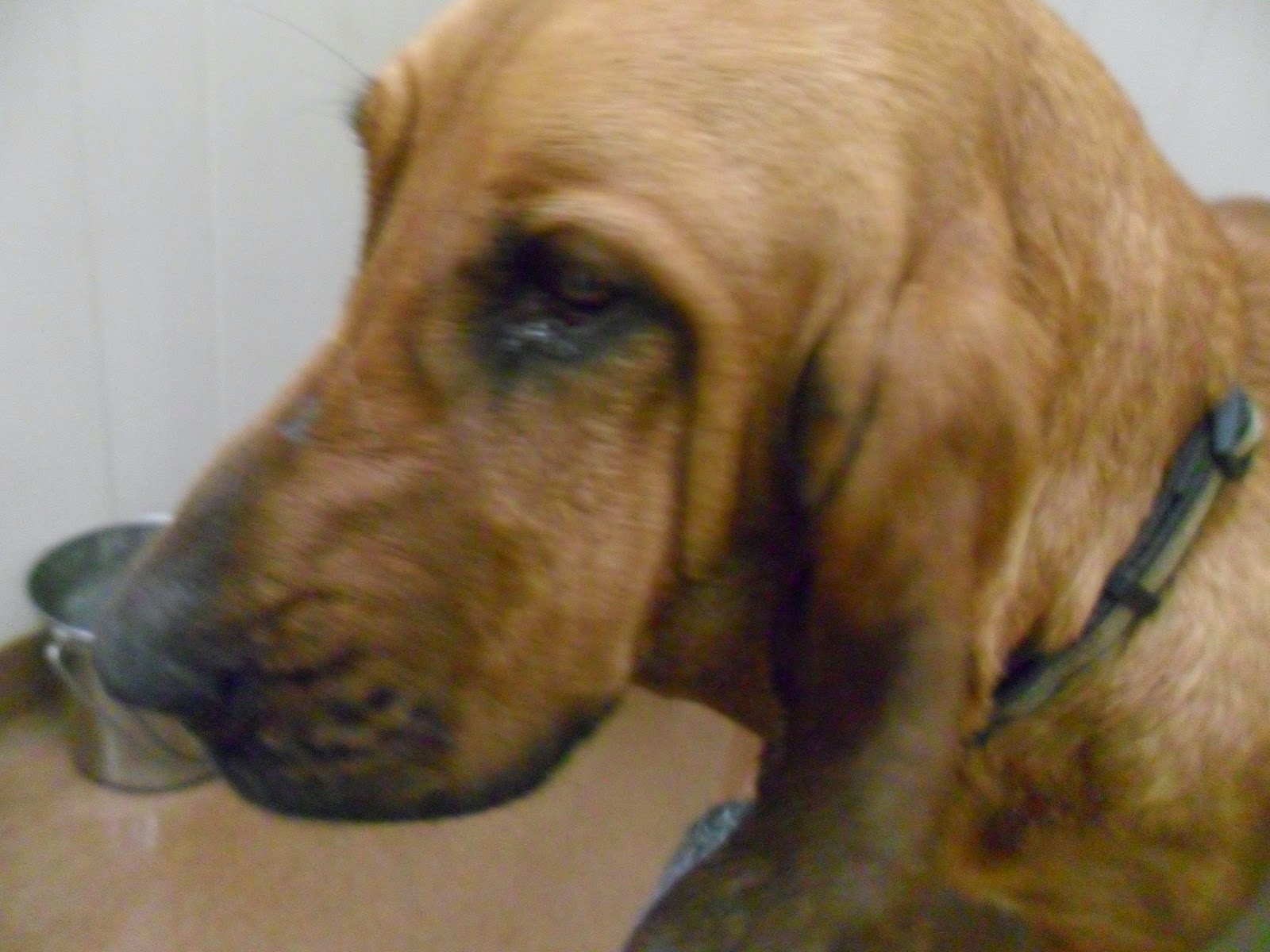 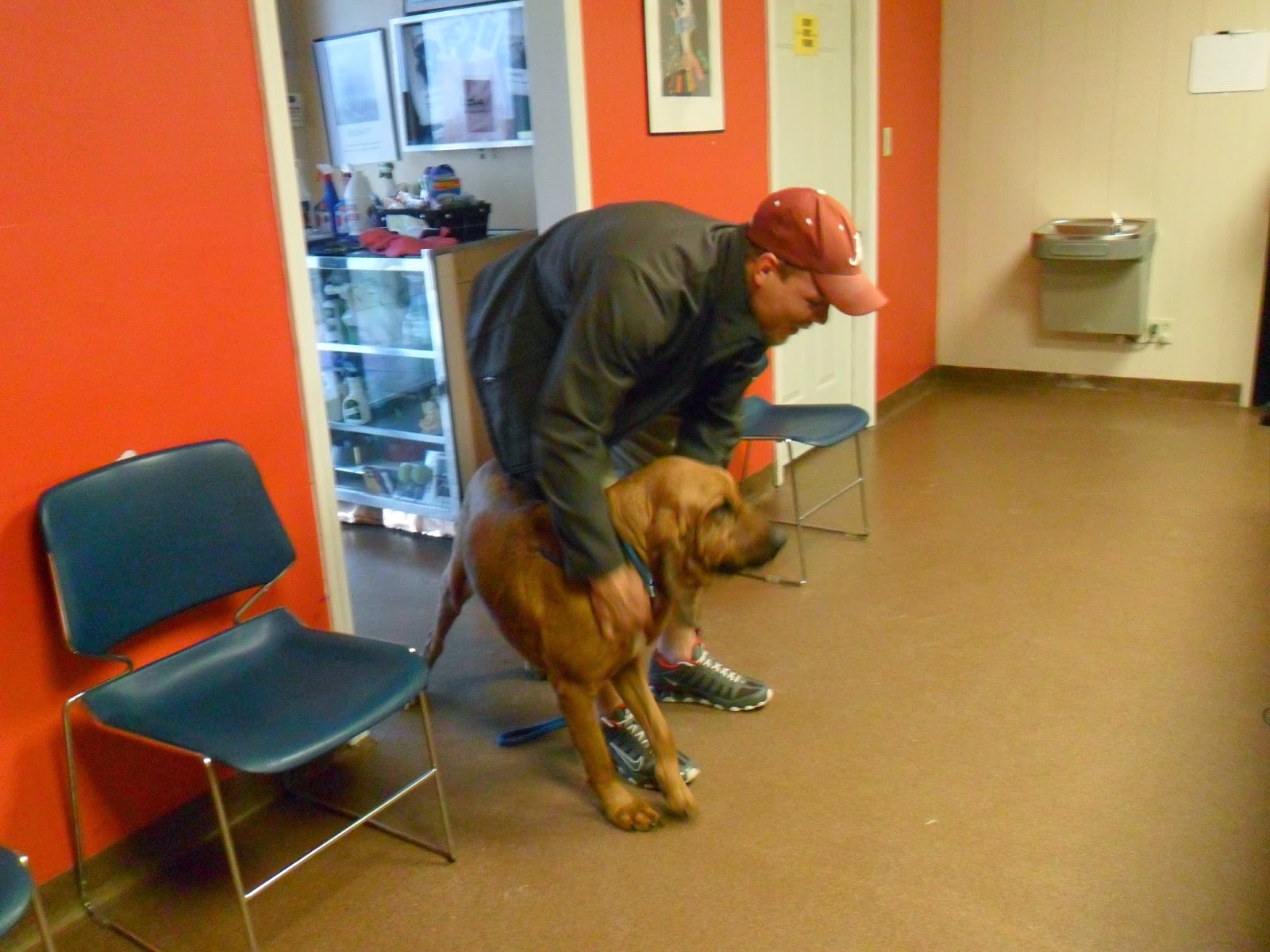 Rocky Shrum couldn’t believe his ears when he received a call from Ark City’s police service officer, Matt Soule, telling him that his dog had been found.
The bloodhound had gone missing two years ago, when she was only 9 months old, and Shrum thought he never would see her again.
Yet the story took another twist when Shrum heard where Soule was calling from — 700 miles away.
Shrum’s dog had disappeared from Scottsville, Ky.
There was no doubt the friendly bloodhound girl was Shrum’s.
The microchip she carried underneath her skin revealed his contact information when Soule scanned her, a standard procedure for the PSO when encountering stray animals.
It also revealed her name — Ali-Bama.
Ali-Bama first had been spotted Dec. 11, 2014, outside of Ark City, and her picture was posted on CCHS’s Facebook page.
She then wandered onto the porch of a house within city limits, and the caring residents called the PSO, who picked her up, made that initial phone call and transported Ali-Bama to the shelter.
Once there, shelter employee Amber Wilson called Shrum to discuss what would happen next.
Shrum was overcome with joy and immediately agreed to drive to Kansas to pick up his long-lost bloodhound girl.
True to his word, Shrum, together with Frannie Law, left Kentucky on the following Friday night after work.
They took turns driving, stopping only for a few hours during the night to take a nap.
They arrived at the shelter after a 12-hour trip on a Saturday.
Shrum didn’t have to introduce himself when he walked through the shelter door — he was beaming from ear to ear, and shelter staff immediately knew who he was.
While filling out the necessary paperwork, Shrum told the staff how Ali-Bama had disappeared.
On that fateful day two years ago, he had been out of town on a job and entrusted the pup into the care of a friend. Upon his return, the friend tearfully broke the news to him that Ali-Bama was gone, possibly stolen.
Shrum had left no stone unturned to find his dog, but it was in vain — until now.
He couldn’t wait to see his dog again, and Ali-Bama pulled toward him as soon as she heard his voice on her way from the kennel.
After a joyful reunion, Ali-Bama walked out of the shelter door with Shrum and Law, and never looked back.
She finally was going home.
The reunion was caught on video, and can be viewed by going to YouTube and typing in “Cowley County Humane Society.”
Posted by Cowley County Humane Society at 4:10 PM No comments: