Meet Black Jack, a cheerful little dachshund with a difficult history. Jack first came to the Cowley County Humane Society in May of 2013 as a puppy. He had been found as a stray and brought to us. He was vetted and adopted by a family less than two weeks later. Sadly, his family had to return him after only three months due to financial hardhips.
Black Jack found a new home in just four days and lived with this family for two years. But he was returned, again because his family was suffering financially and couldn’t afford his care. Two weeks later another family took him home, only to return him the same day because he didn’t get along with their other dogs.
Was Black Jack ever going to find his furever home?
During his latest stay at the shelter behaviors in him were observed by shelter staff that concerned them. Behaving normally one moment, Black Jack would suddenly become stiff and fall over on his side. Shelter veterinarian Dr. Lindsay Gehring examined him; the exact cause of this behavior was uncertain, but it appeared Jack had cataplexy. Cataplexy is a condition which causes a person or animal to suffer sudden physical collapse while remaining conscious. Cataplexy is not life threatening but it can be very upsetting to observe.
Since Jack’s future health needs are uncertain, the shelter staff submitted him to a rescue group. While waiting to hear from the rescue, a couple visited the shelter looking for a small lap dog. They had recently lost their elderly dog and were looking for a companion for the husband, who was in hospice care for a terminal condition. CCHS Animal Care Manager Mary Brill had been taking Black Jack home with her every evening and suggested him as he loves nothing more than laying in someone’s lap, being 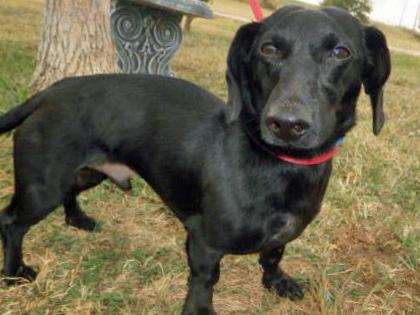 petted. He seemed the perfect solution! However, with the husband’s health, the couple was concerned about adopting a dog who may need extended medical care. After a quick conference, shelter staff suggested they take Jack home for an extended foster. This seemed the perfect solution.
The couple took Black Jack home in October and he’s been a loveable buddy for a gentleman who benefits from his constant companionship. Jack’s future is still uncertain. But, for now, this little dog with health concerns of his own is providing invaluable support, many kisses, and loving snuggles to a man who greatly needs them!

End of Year Review
Despite our donations being down in 2015, the county cutting our budget by $7,500, and the Rescue Waggin' no longer stopping by our shelter, we have managed to adopt out more animals than ever before! A record number of 1290 animals found new homes in 2015 (1131 in 2014)!

We were also able to significantly lower our euthanasia rate by 55% compared to 2014.This was achieved by an aggressive adoption policy, being able to treat more animals with medical problems, initiating a foster-to-rehome program, holding adoption events in the Wichita/Derby area on most weekends and working with rescues and foster homes. Winfield Police Department and local businesses have partnered with CCHS to feature Pet of the Week and give more exposure to adoptable animals. We hope to continue adopting out more animals and lowering the euthanasia rate even further.

Last year, we graduated from PetSmart's Rescue Waggin' due to the success of our adoption program. However, we continue to be a shelter in good standing with the program and remain eligible to transport dogs on an on-needed basis.

Our shelter veterinarian, Dr. Angela Gatton, left us in early 2015 to move out of state. We welcomed Dr. Lindsay Gehring as our new shelter vet.

In 2015, our outdoor kennels became too dilapidated for further use. They had been repaired repeatedly by the Winfield Correctional Facility work crew during the past few years, but were beyond repair at the end of 2015. With the help of our investment in Legacy Fund, donations, fundraisers by community members, and Orscheln Farm and Home Store, we were able to purchase new ones!

With a Little Help From Our Friends

We can't do what we do without you! Here are just a few examples of the support we have received in December. A huge thank you to everyone who has donated, volunteered or adopted! 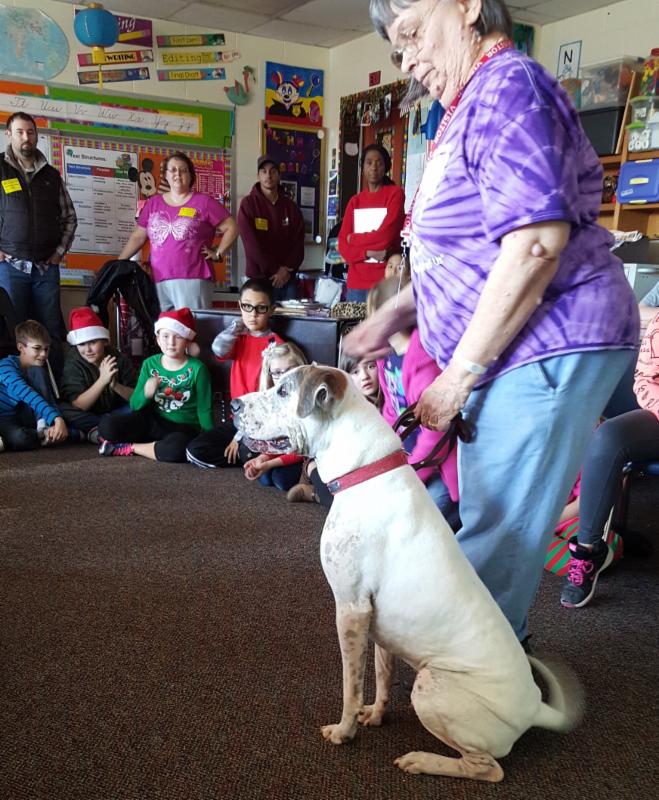 Karen Rogosch's 5th grade class at Whittier Elementary School collected $215 for a community service project, benefiting CCHS! The class officially became a shelter sponsor. Mrs. Rogosch has initiated fundraisers for the shelter for many years now and invites board member Teresa Cox, along with her dog Percy, to speak to the students about fostering and responsible pet ownership. Percy was adopted from CCHS by the Coxs in 2007. Thank you so much, teachers and students!

Surprise for the Shelter Staff! 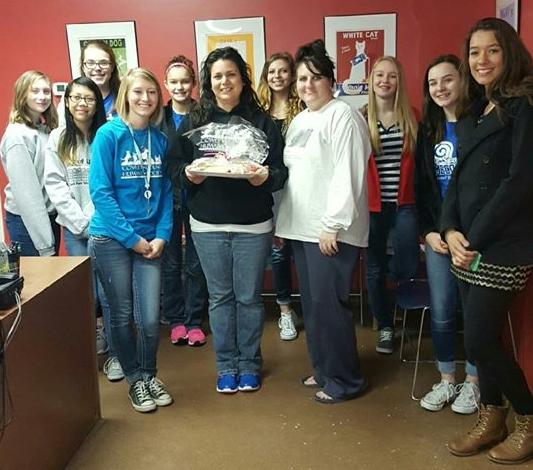 Winfield Middle School Builders Club visited the shelter with some delicious Christmas goodies for the staff! They will be hosting a fundraiser in January to benefit the shelter. The goodies were much appreciated! 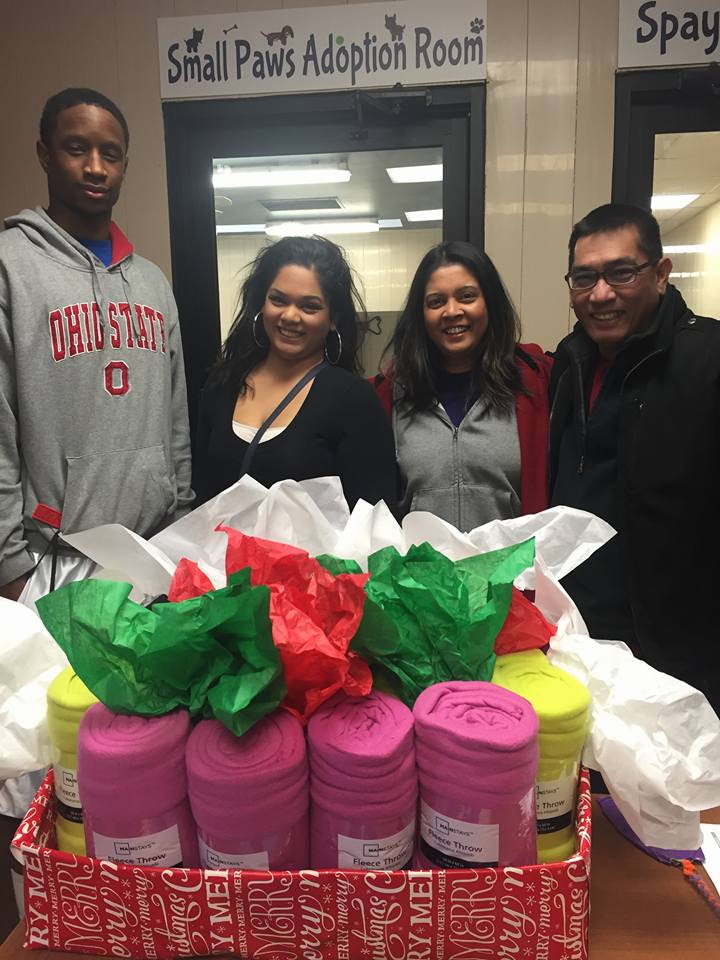 Santa came two days early for the shelter animals when the Farid family donated a basket full of warm blankets! Thank you! 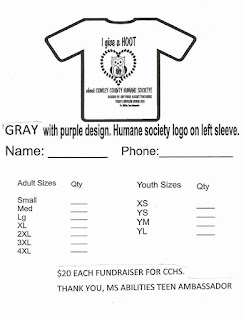 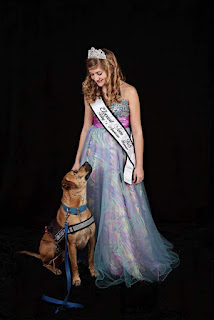 Jody Furrh, Miss Elegant Teen Kansas, adopted her service dog Justice from CCHS in 2015. In order to raise funds for the purchase and expansion of our outdoor kennels, she is selling a t-shirt which she designed. Please call Jody at 620-517-0948 to purchase. 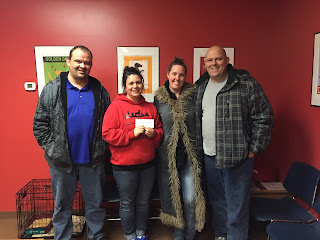 A huge thank you to Richard, Angela, and Mike Steiner for presenting us with a check in the amount of $362 today! They had organized the Labyrinth of Terror in Winfield, with support from Cowley County Community College students, to benefit us and the Winfield Food Pantry.They plan on doing the whole thing over again next year--keep an eye out for event info! 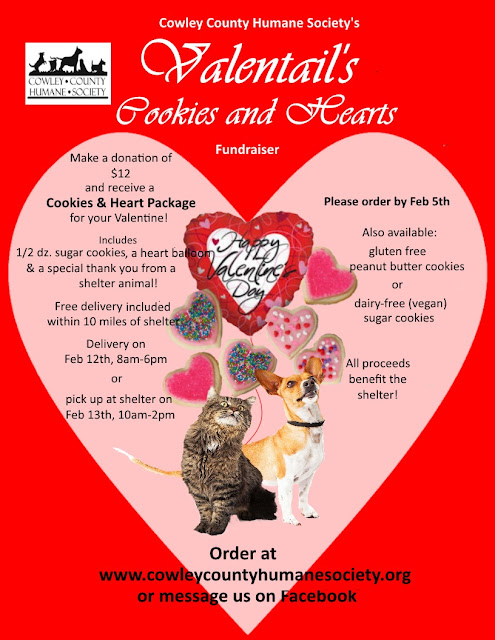 Posted by Cowley County Humane Society at 1:07 PM No comments: