On a cool day last fall a passerby spotted a limping cat. They couldn’t catch it as it acted wild but they knew it needed help. They set a trap and caught the cat so they could bring it to the CCHS to be cared for. Normally staff does a thorough examination of each animal upon intake. Dubbed Tiger Too, the big tabby was having none of that! Staff thought he was feral and so kenneled him in a quiet corner to settle. When his kennel door was opened, Tiger would try to dart out and escape. 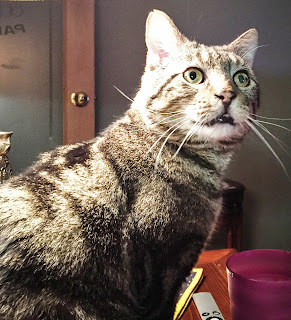 Tiger Too had to be sedated so that our shelter vet, Dr. Lindsay Gehring, could examine him. It was discovered that one of his hind legs had several old breaks that were healing improperly. Dr. Gehring determined that the best course of action was to remove the leg. Tiger’s leg was amputated and he was kenneled in the clinic to begin the healing process. This was when shelter staff made a discovery – Tiger wasn’t feral after all! Perhaps he was just frightened and in pain when he was brought to us, but he turned out to be quite friendly. As he healed he was allowed to roam freely in the clinic area where he quickly stole the hearts of all he met. Because those of us who work at the shelter sometimes have an oddball sense of humor, Tiger Two was renamed Lieutenant Dan in honor of his missing limb. 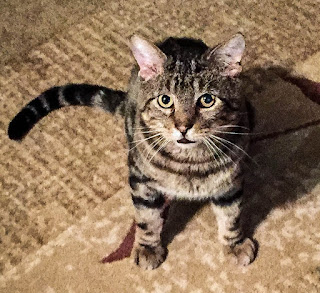 Once Dan was fully healed he was sent to PetSmart in Wichita where CCHS has kennels in the store's adoption center. After only a few days the Karasek family saw him there and were charmed, but did not adopt Dan as they weren't looking for a new cat. However, he stayed on their minds. Diane says, “Jim and I would stop at PetSmart occasionally when we were in Wichita. When we were home after seeing Lieutenant Dan, Jim made the comment that he couldn’t stop thinking about him. We went back the next day and adopted him.” And they couldn’t love him more. The Karasek’s three grandchildren love Dan, too! Nolan, especially, loves Dan. So much so that he sleeps with a framed photo of Dan.

“Dan has become a very loving member of our family. We love him so much and appreciate the care he received from CCHS before we got him.” Thank YOU, Jim and Diane for giving this wonderful, three-legged boy such a loving home!

Update on Black Jack from last month's newsletter:
Sadly, Black Jack's foster dad passed away a few weeks ago. However, his foster mom decided to give Black Jack his forever home and adopted him!

Posted by Cowley County Humane Society at 10:05 AM No comments: