Petpalooza Is Coming Up!

Bring your four-legged friend(s) and have some fun with us! On Sep 10th, we are celebrating our furry companions with Petpalooza! There will be a 1-mile fun walk, contests for you and your pets, dog parks, miniature horses, dog race, vendors, cake walk, activities, raffle, silent auction, doggie boutique, hotdog bar, adoptable shelter animals, and more. See you there - admission is FREE! 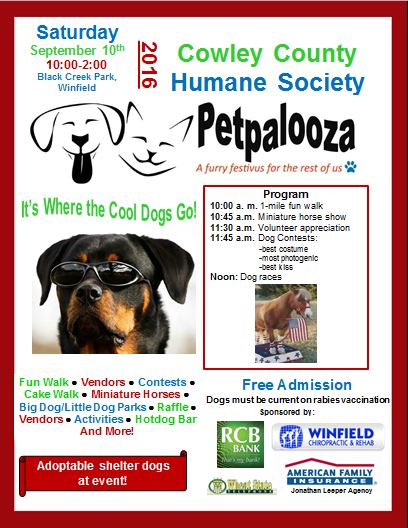 Posted by Cowley County Humane Society at 11:48 AM No comments: 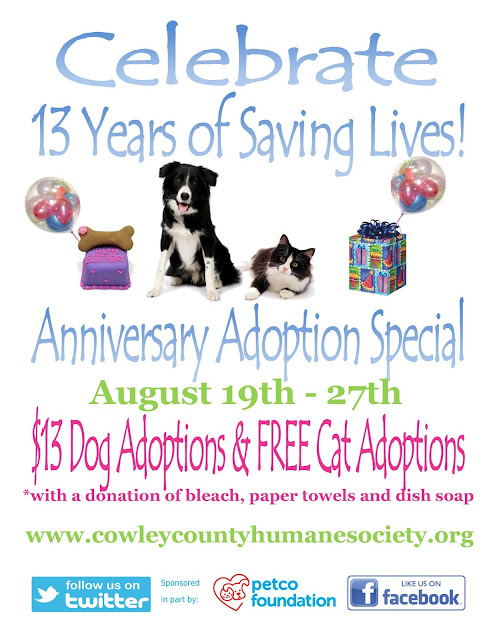 Posted by Cowley County Humane Society at 11:42 AM No comments:

Last December the humane society received a litter of three 4-month old kittens. The owner had been unable to re-home them so turned to us for help. The beautiful, little Siamese mixes quickly found homes. About two months after he was adopted, the male was trapped running stray and returned to CCHS. We called his adopter but she informed us that she had been forced to re-home him and didn’t know the name of his new family. He was held for the standard stray period but no one came forward to claim him. Already vetted, he was immediately made available for adoption.
I work at the CCHS and kept being drawn to him every time I walked by his kennel. We had an 8-month old kitten at home, also adopted from CCHS. My husband kept saying she needed a playmate but she showed no interest, and often outright distaste, for the little foster kittens I brought home. Still, it was worth a shot. Maybe, since he was closer to her size and looked less like a mouse than the tiny foster kittens we occasionally had, she’d take to him? Not holding out much hope I brought him home. Within 30 minutes the two youngsters were chasing each other up and down the hallway, wrestling, and napping together. It warmed my heart.

We renamed him Lucius since his new friend was Narcissa. If you’re a Harry Potter fan, you’ll get that. Luc, as we call him, proved himself to be just as friendly, cuddly, and loving to humans as to Narcissa. He doesn’t know a stranger. When anyone visits, rather than hide like many cats, he rushes out to see who is visiting him.

Luc’s loving nature isn’t limited to the humans who live with and visit him. He loves our fosters!
We regularly bring home 4-6 week old kittens to hang out at our house until they are old enough to be ready for adoption. They all LOVE Luc and he loves them back. It’s very common to find one, or a pile, of kittens sleeping on him. We call him Lucky Lucius but, really, we are the one who are lucky to have him.