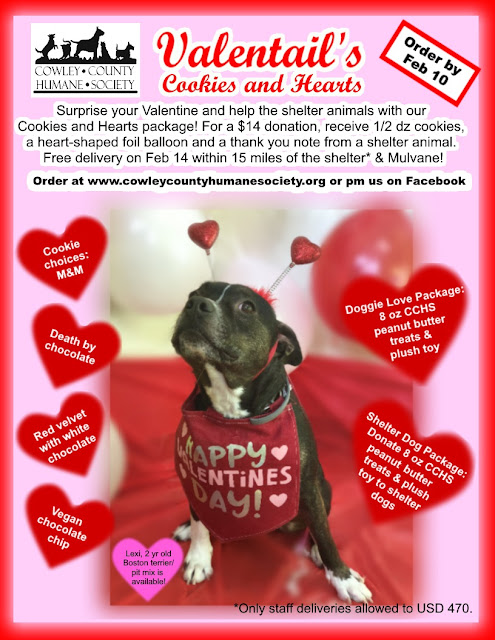 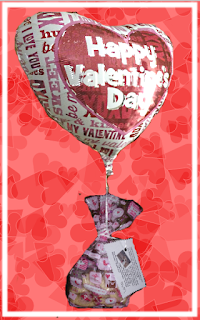 Heart-shaped foil balloon, 1/2 dozen cookies, and a thank-you note from a shelter animal. 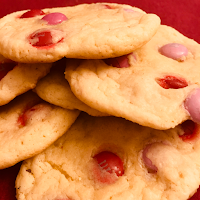 M&M
These delicious melt in your mouth Valentine’s M&M cookies are sure to be the perfect “Valentail’s Day” gift for anyone! We start with our secret batter and load it with festive colored red, pink, and white M&M’s and then bake it to “Pawfection”. These cookies are soft, chewy, and AMAZING! 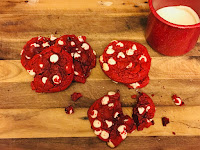 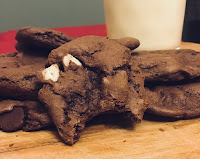 Death By Chocolate
The name says it all…We start with our delicious fudge cookie batter and add three different types of chocolate morsels – dark chocolate, milk chocolate, and white chocolate - to our already divine batter.  The chocolate lover in your life will be forever grateful for this gift! 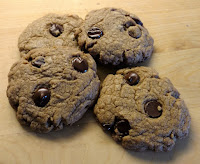 Coconut oil, molasses, cinnamon and semi-sweet chocolate chips—that’s what makes this vegan and organic chocolate chip cookie so delicious and flavorful! Crispy on the outside and chewy on the inside--you can’t go wrong with this classic! 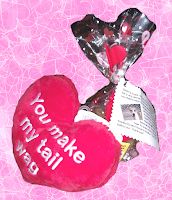 If your Valentine has a wagging tail, we have you covered! Your dog will love the 8 oz of peanut butter treats, made just from flour, coconut oil, and all natural peanut butter, and the plush Valentine's toy!

Or be a shelter dog's Valentine by providing a Doggie Love Package to one of our shelter residents. Tail wag guaranteed!


Posted by Cowley County Humane Society at 3:49 PM No comments:

A Tale of Two Kitties

What do a Big Mac, a McFlurry and a Small Fry have in common? All three were found at McDonald's and are kittens!

At only six weeks old, infested with fleas and showing signs of upper respiratory infection, the three
siblings found themselves abandoned at the Winfield fast food restaurant last October. Lucky for them, a caring citizen called animal control and the kittens were brought to CCHS, where they were treated, vetted and transferred to a foster home until they were ready for adoption.

Meanwhile, almost 2.5 hours away in Pratt, KS, Susan and Randy Teske decided it was time to adopt a new family member after one of their resident cats passed away at the age of 15.

The family is originally from Wellington and when word got out that they were looking for a kitten, a Winfield friend posted the CCHS January adoption special flyer onto Susan's Facebook wall. It's been a long time since the family had kittens, but Susan, a teacher, was home for the holidays and the time for adoption just right! The Teskes are no strangers to rescue; all of their cats have come from humane societies or were strays and the family supports shelters and helps with transports whenever they can.

Susan started looking at the CCHS cats, found McFlurry and Small Fry and contacted the kittens' foster mom for more information. Big Mac was already spoken for and since the two girls were a bonded pair, the Teske family decided to make the trip to Winfield and bring them both back home!

Re-named Callie and Amelia, the two kittens adapted quickly to their new home which they share with a senior cat and dogs. They immediately started their new jobs as companions, entertainers and lap warmers and are bringing much joy to the Teske household. And so ends the tale of two kitties in the best possible way!

Posted by Cowley County Humane Society at 3:29 PM No comments: