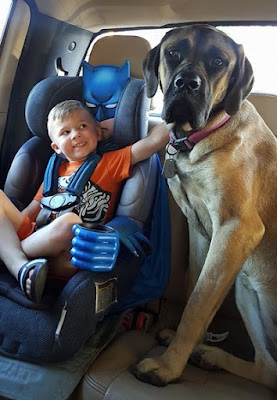 Everything happens for a reason — or so it seems in the life of Mowgli, a 1-year-old Mastiff mix.
She managed to get loose one day and scratched a neighbor of her previous owner.
Mowgli was called in as a stray, and the Arkansas City Police Department’s animal control officer picked her up and brought her to the Cowley County Humane Society (CCHS).
Because she had scratched the neighbor, Mowgli had to be quarantined and monitored in case of rabies.
Meanwhile, Jeanna Retana’s children had been asking for a dog for a while.
“They wanted a bigger dog that they could play with,” Retana said. “I had seen Mowgli on the Cowley County Buy, Sell, Trade (Facebook) site, where they were wanting to find a home for her.”
“I’m a single mom with three kids,” Retana added. “I wanted to make sure the dog was good with kids.” 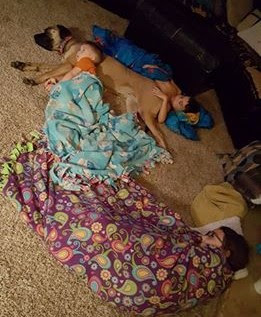 But Mowgli’s previous owner had children, as well, and she told Retana that Mowgli was great with kids, as well as housebroken.
“Those were two major pluses for me,” Retana said. “Because I don’t have a lot of time.”
Mowgli’s previous owner was able to produce paperwork proving that she had been vaccinated for rabies, and the neighbor who had been scratched signed a waiver that allowed the owner and CCHS to re-home Mowgli, with ACPD’s approval, which the police gladly gave.
“They (CCHS) were very helpful,” Retana said. “They were quick to respond and were very friendly. I chatted back and forth for quite a bit, and they were very helpful.”
Mowgli is now in her fur-ever home and loving it!
“She is absolutely fantastic,” Retana said. “She is really great with my kids. They lie on her like a big pillow and she is just a big Teddy bear.”
While Retana initially was worried about Mowgli being so big, that has changed completely.
“She has been the best dog I’ve ever had,” Retana said. “She lies at the foot of the kids’ bed at night. I couldn’t ask for anything better in a dog.” 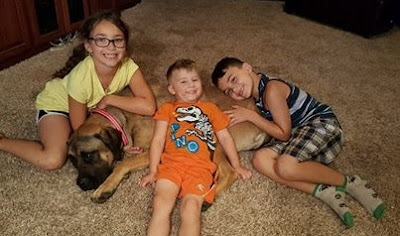 Posted by Cowley County Humane Society at 10:26 AM No comments: